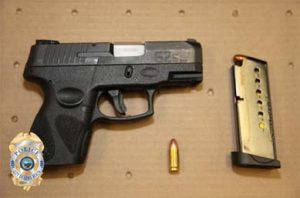 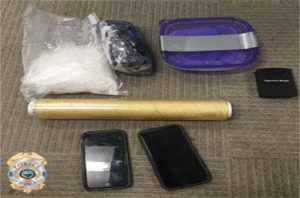 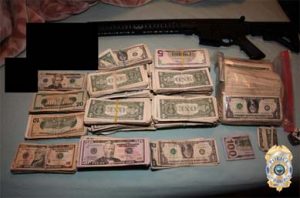 Today, The Los Angeles County Probation Department was a part of a collaborative effort with the Long Beach Police Department, Los Angeles County Sheriff’s Department and California Department of Corrections and Rehabilitation that led to thirteen arrests, including suspects wanted for murder. As part of the operation, seventeen probation officers discovered weapons, narcotics and other illegal contraband in probationer’s homes.

On Friday, February 14, 2020, the Long Beach Police Department (LBPD) coordinated a complex, multi-location operation related to the investigation of two murders and at least five shooting incidents, which resulted in the arrest of three male juvenile subjects and additional suspects. In an effort to seriously impact violent crime in the City of Long Beach, the operation included simultaneous search warrants and parole and probation compliance checks at 24 locations in Long Beach, Los Angeles, Norwalk, and Paramount. It also included inmate cell searches in various state prisons and in two Los Angeles County jails. In support of this operation, the below agencies conducted the following:

The current arrest totals in this operation include 13 individuals, ten adult suspects and the three juveniles, who were taken into custody and booked on various charges. In addition, six firearms, five handguns and one rifle, were seized, approximately three pounds of methamphetamines, undetermined amount of U.S. currency, and additional evidence is still being processed. The male juvenile subjects, all from Long Beach and members of a local Hispanic criminal street gang, were taken into custody and booked for the following:

The incidents these subjects are believed to be responsible for, which affected the lives of 19 male and female victims ranging in ages 16 to 71, occurred between November 21, 2019 and February 4, 2020 at various times and locations and are as follows: Murder Investigations: November 22, 2019 – 1500 block of Magnolia Ave.

Through substantial evidence gathered throughout this 4-month-long investigation, in addition to critical information provided by community members, detectives identified the three juveniles as those responsible for these multiple senseless acts of violence. Detectives believe these crimes were committed in furtherance and for the benefit of a gang. Detectives anticipate presenting their case to the Los Angeles County District Attorney’s Office early next week for filing consideration. “It is unacceptable that we have 16 and 17-year-olds from our community who are being recruited into the gang lifestyle and choosing to terrorize, injure and end the lives of others,” said Long Beach Police Chief Robert G. Luna. “These arrests are a strong reminder to our community that it is our shared responsibility to identify and disrupt pathways to violence.” The LBPD will continue to work with our government, community, and law enforcement partners to protect our community and continue making it a safe city for all people. We also remind our community that if you observe threatening or concerning posts on social media, you must immediately report it. Additional Search Warrant Arrests:

There were seven additional arrests made by the Los Angeles County Probation Department and the California Department of Corrections and Rehabilitation. For more information regarding these arrests, please reach out to the respective agencies.

We urge anyone who may have information regarding any of these incidents to immediately contact the LBPD Homicide Detail Detectives Adrian Garcia, Sean Magee or Leticia Gamboa at (562) 570-7244. Anyone wishing to remain anonymous may call 1-800-222-TIPS (8477), or text TIPLA plus your tip to 274637 (CRIMES), or visit http://secure-web.cisco.com/1wyMwkLb9jdMYTBylBo3I0hYaoOPehRdFhm5uk2TmBXFthv4zKyHwXIg15PS6NfjIYsSdDwNhdfxt9L15IT7mSF9mCAkRJmnPN5a9tpX4_AF_jrKkog9m0VzBf16XG42u2vydpxAvHFgpAO9wSB0ANP4vLDJEdAyVXOdk9u-sn57OjbLNPS77Pi5VQL2_76-Kl36CjnDZ5NIj0law6UEZmubY_DAVwWtSMMunbF7x4rP8bYRAsWU5yHmzF9XpooCuVp-vP9ciz0bthLRLnka10eYgNaB2uJYBXyRSWnkgs-bCOLSBteuZpAASBLc4h2u8XkIb6jyl1k7GEXaEuLnSN9YJq4mLSQ_joH0UJtpDU0MGa7dtNV_BO_ZQRUSktd4trTsS3TnZW4xS2aPODy7XLPXALjxXr7Vtgj9zKxjtLz0OJndPLKZJrlteFPDjvY8Eni9-8UUrq3wJgpOojs76sQ/http%3A%2F%2Fwww.lacrimestoppers.org