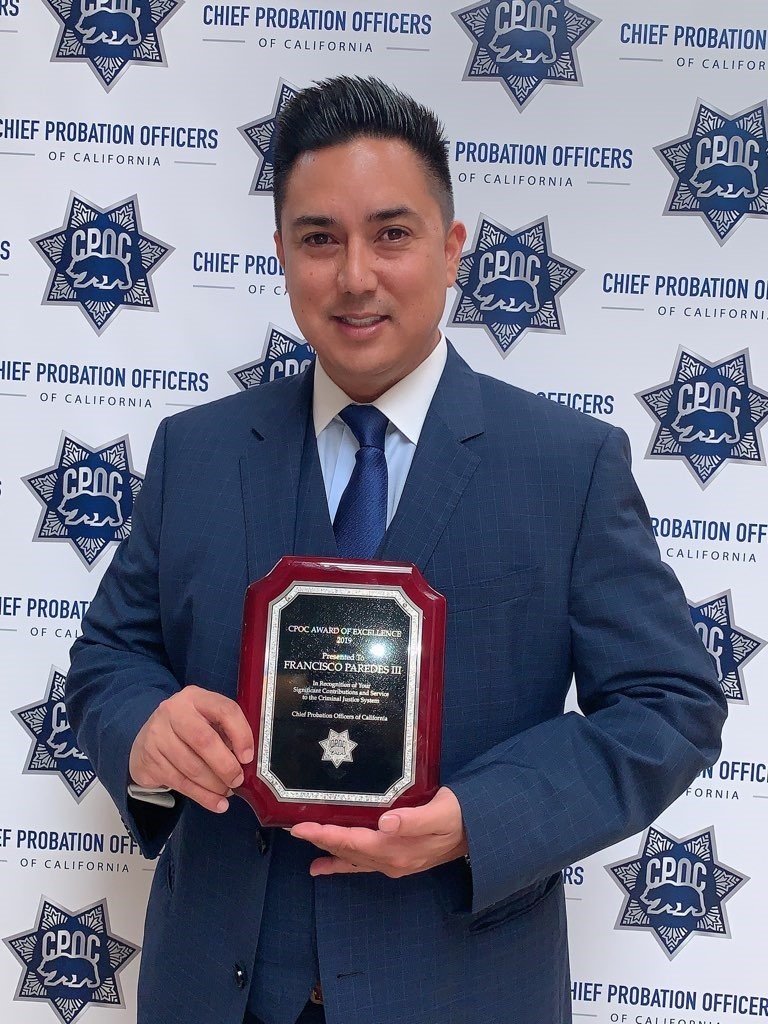 The Chief Probation Officers of California (CPOC) honored Special Assistant Francisco “Frank” Paredes III with the 2019 Award of Excellence at their annual awards luncheon in Napa December 12. CPOC sought out candidates for this award from across California’s 58 counties for those staff who make significant contributions to the field of Probation as nominated by their chief probation officer.

CPOC is an association of Chief Probation Officers from each of the 58 counties of California. This body advises the state’s lawmakers to create legislation and policies that are aligned with the goals and missions of the probation departments throughout the California. Terri L. McDonald, Chief Probation Officer was proud that CPOC recognized Mr. Paredes and his contributions to the County of Los Angeles.

“I thank CPOC for acknowledging and honoring the incredible service that Frank provides not only to the Probation Department, and to the County of Los Angeles, but also to the State of California through his commitment to training and professionalism,” McDonald expressed. “Frank Paredes exemplifies what makes Los Angeles County Probation the leader in community-based corrections.”

Special Assistant Paredes is currently assigned to the AB 109 Services Bureau where he assists Probation executive staff in conducting investigations and administrative studies impacting a wide range of subjects that affect departmental operations. Paredes has been with the L.A. County Probation Department for 17 years, beginning his career as an intermediate typist clerk and promoting to a deputy probation officer before landing in his current assignment. Paredes says he’s always enjoyed the various jobs he’s held throughout his county service and his success comes from a commitment to excellence by him and his colleagues.

Paredes says it is an honor and privilege to be honored in this way and says he couldn’t have achieved it alone. “I am a reflection of my team,” said Paredes. “I have been fortunate to work with so many wonderful people.” He attributes the trust put in him by his peers and management staff for his success.

Among his many duties at Probation, Paredes is also a facilitator for the Supervisor Leadership Academy, training supervisors across the state of California and assisting the Probation Department in cultivating an evidence-based organization for clients and employees.

“Special Assistant Francisco Paredes has been a welcomed addition to our AB 109 Bureau. He is a man of integrity, dedication and commitment. He willingly accepts any assignment he is given, he thrives on the challenges presented to him and seeks all opportunities that will enhance his knowledge in every situation that he encounters to better serve the entire Department, the community of Los Angeles and the entire State of California. He is truly deserving of recognition and being presented an Award of Excellence by the Chief Probation Officers of California,” said Darlyne Pettinicchio, L.A. County Probation Bureau Chief for Post Release Services (AB 109).

Some of the other projects Paredes is currently working on are Prison In-Reach for AB 109, Proposition 63 policy for AB 109, and a Women’s Reentry project, which is following a transformative mentoring model. He is also participating in documentary film chronicling the lives of Post Supervised Persons with Adult Reentry.

The Los Angeles County Probation Department joins CPOC in congratulating Francisco Paredes III as this year’s recipient of the 2019 Award of Excellence.